There's been a lot of discussion about how the fiber arts community that can't and/or won't use R*velry can find each other. Here are some ways to find and/or connect with this part of the community.
There are a few websites that have been set up; you'll find a link to the Fiber Indy List in the sidebar (full disclosure: I'm listed there), but also there's the Accessible Patterns Index (I'm also listed there; 11 of my 15 patterns include Low Vision Accessible pdfs) and the Yarn Database.
Websites are great for finding designers and patterns, but what about other crafters? There are healthy crafting communities on Instagram and Twitter! And the easiest way to find them is through hashtags. Through polls and discussions this last week or so, Twitter user BirdieToldMe (@kaysaraahsaraah) has helped to add some hashtags we can use to search for other crafters, as well as designers, indy dyers, and notions makers; talk about finding your community! #RavelryAccessibility, which was coined during the first throes of NuRav to enable ease in finding out what was going on when forum threads were being locked and archived almost as soon as they started has been decided to be left to information posts, and these are the decided upon hashtags to use on pertinent community posts: #OffRav , #OffRavDesigners ,  #InclusiveYarnCommunity and on Wednesdays be sure to use #WIPWednesdayOffRav on your progress pics. By following these tags on Instagram and Twitter, you'll quickly find the vibrant communities existing on both social media sites.
You may be wondering why I've capitalized each word in the above hashtags. It makes them readable to screen readers instead of being garbled, and also easier to read by individuals with sight issues and some who are neurodiverse. I find them easier to figure out as a glasses wearer since age 9 ½. Unfortunately, this means typing out the hashtags every time instead of relying on auto fill or the suggestions that pop up. But I think those extra few seconds are worth it to make the hashtags accessible and inclusive. If we want to say we have an #InclusiveYarnCommunity, we can show it by our hashtags.
Some designers have set up new places to house their forums as well. Louise Tilbrook moved her "Everyday Knitters" group off of Facebook earlier this summer to a new home on Mighty Networks. Tania Richter had been using Discord; I'm not sure if she's still using it due to her extra severe migraine and subsequent medical appointments/corrective lenses/minimizing time of any kind of online activity/medications. I've heard others are trying to incorporate fora into their existing sites, but I'm not aware of anyone who has this up and running just yet; if you're aware of anyone who does, please let me know in the comments below so I can boost it.
I've given my R*velry group members a heads up that the group will be disappearing before the Classic Rav deadline is up. As of this writing, I haven't decided how, or if, to replace the group. It was never as much as a hub as I'd hoped. I'll be hosting test knits via either Fiberly or Yarnpond going forward, which was the main reason for my group's existence, so I don't feel I really need one right now. Something to think of in the future maybe.
Yours in yarn and hashtags,
Síle
at 2:43 AM No comments:

Getting my things together this morning for my return home after a doctor's appointment in Town yesterday.
I finished my Harvest Monday evening! I had all but the left pocket done on Sunday night so I wore it in. Here it is; not the best light I'm afraid: 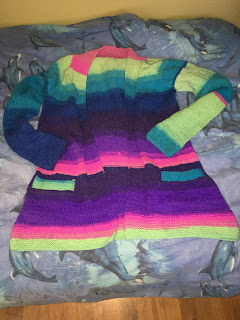 After my appointment yesterday, I headed downtown. Downtown St. John's is a treat to walk around. I got lunch as takeout and thanks to a brilliant sunny day I walked up to Harbourside Park to eat. 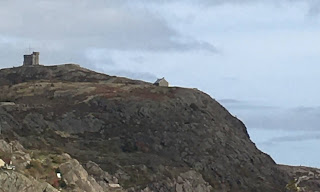 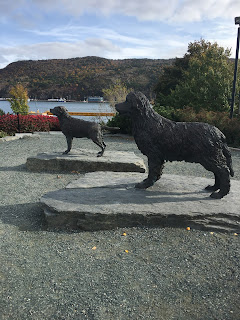 And I suddenly had the urge to have my friends Newfoundland and Labrador ;) "model" my sweater. 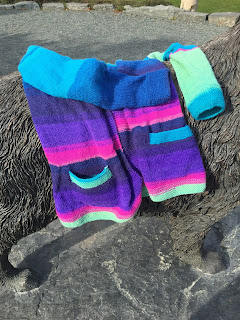 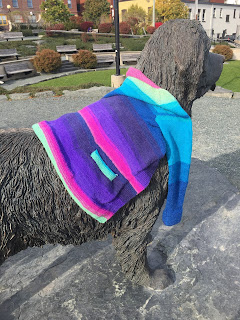 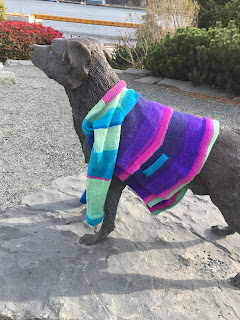 Aren't they great sports?
From Harbourside Park I headed for a bit of a walk. I captured some prettiness near the Newfoundland War Memorial. 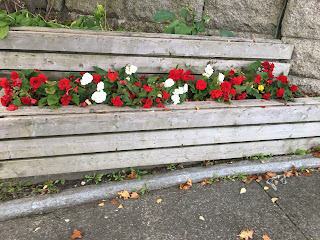 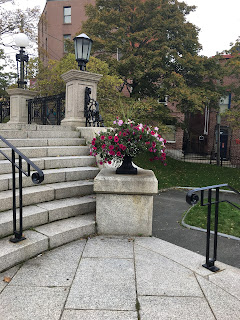 Then I caught this one of the Newfoundland Chocolate Factory's whimsical mural. 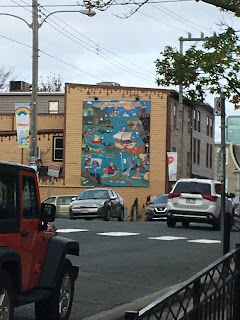 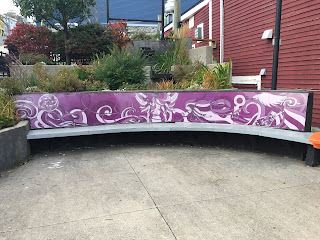 There's a little slice of St. John's downtown for you! I like to refer to St. John's as "pretty city"; I think you can understand that now.
Now that my sweater is done, I'm back to focusing on my own designs. I'm feeling a bit renewed. I have the Hornpipe Bag with me for some shuttle knitting, as well as a swatch (that I'm calling a coaster) for something new that popped into my head last week.
Yours in yarn and (at this moment) Town,
Síle
at 5:28 PM No comments:

I promised I'd be writing a post about Ravelry and it's taken me some time to wrap my head around things enough to write it out.
On September 29th (Oh gee, another Tuesday announcement; I digress), Ravelry announced that March 31, 2021 would the end of "Classic Rav", and in their happy happy joy joy manner told us there's a new settings option in NuRav.
That would be nice except there are plenty of people saying that neither of the options (named for sheep breeds; isn't that precious?) of NuRav works for them. I haven't heard if either of these works with screenreaders. I know that "Herdwick" mode is no less nauseating for me than "Merino". But after March 31 I, and many others, won't have the option of avoiding them both.
At least we have a deadline for getting our information off. I guess that's a blessing. I will be keeping my stripped account in place after the deadline. Hopefully I'll be able to keep entering pattern pages in the database despite everything. My latest goings on will be here and on my Instagram and Twitter accounts (links in the sidebar).
After that bit of bitter medicine, yesterday's Ravelry blog announcement (Not on a Tuesday! Is that allowed?! I digress, again) just solidified that they're moving full steam ahead. Goody goody gosh! You can now imbed Spotify playlists in your profile and forum posts. And it's been being pointed out on twitter that that's a pretty good slap in the face for those podcasters who aren't able to use the frigging site!
I just don't even know what to say anymore. No, that's not quite true. I do know one thing to say: I'm glad I closed my Ravelry shop in July.
So that's the latest on the Ravelry front.
My next post should be a return to happier things, like a finished project ;) I have 30 rows left to knit on the body of my Harvest cardigan, then I'll return to the pockets. I should have a new sweater to show off in Town when I'm there early next week.
Yours in yarn and (almost) a new sweater,
Síle
at 3:07 PM No comments:

How Not to Knit a Sleeve (aka Read the Pattern) 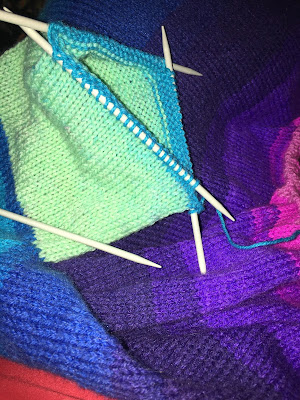 Last evening I settled in to get more done on the sleeve of my Harvest cardigan. I knit for awhile and thought I was nearing the number of stitches where I would stop the decreases and work straight, so I pulled up the pattern (I do everything on my phone. I mean everything: drafting patterns, writing blogposts, all social media, etc). And as my eyes scanned along I realized something.
I had skipped a very important line.
After returning the sleeve stitches to the needles (I'm working the sleeves on double-pointed needles), and before starting the sleeve decreases it reads "Knit straight for x inches."
Um... yeah, that's not what I did. I went straight into working decrease rounds interspersed with x plain rounds. *Facepalm*
I measured how long the sleeve was at that point: 7½ inches (19cm). *Facepalm*
After saying a few choice words, I frogged the sleeve. And then I restarted it. I knit 4 inches, without decreases, before turning in.
I haven't done anything quite so silly in quite awhile so I guess the yarn gods decided to keep me from getting too cocky. I will say it's going smoothly and I'm hoping to keep to my original timeline and be able to wear my new sweater when I go to Town later in the month.
So that's my tale of knitterly woe. I hope this saves you from doing the same thing.
Yours in yarn and sleeve stitches,
Síle
at 8:55 PM No comments:

Email ThisBlogThis!Share to TwitterShare to FacebookShare to Pinterest
Labels: knitdancerepeat, knitting, not my pattern, photos, read the pattern more than once, update, what not to do, WIPs
Newer Posts Older Posts Home
Subscribe to: Posts (Atom)