Anyone Have Any Bubblewrap?

I've gone and done it this time. Guess who has sprained their back. If you thought "Síle" you're bang on.

How did it happen? I was doing the exercises my physiotherapist gave me to help (oh the irony) strengthen my back and core. Yes, really. Boggles the mind, doesn't it?

This happened Tuesday evening (April 27th). I was in enough pain to go up to the hospital on Thursday night and there we are.

Thankfully I have the crack medical team of Jakey and Silver here to ensure I don't move around too much. Their technique is quite unique; you talk about bedside manner? These two have mastered on-bed manner! 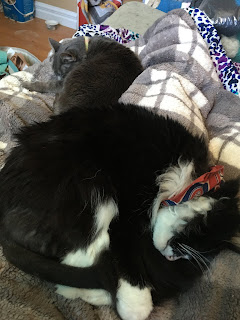 That's the latest with me. How are you? Anything exciting going on where you are? I've started a new project, Killeany by Alice Starmore. Lots of yummy cables once I get this ribbing out of the way. What's on your needles?

Yours in yarn and back pain,

When a Project Takes Longer Than You Thought

I think this is something a lot, dare I say most, designers face. You come up with an idea. You swatch for it, play around with charts. And finally you cast on and begin the sample.
Everything goes smoothly for the first bit and then natural little hiccups happen. A twisted stitch here, a purl where a knit should've been there; easily spotted and fixed blips that happen to all knitters at some point along the way. So you keep working on it, making a few small tweaks and making note of them as you go.
Somewhere a bit passed halfway through, you sometimes start to lose interest in the piece. It looks good, you're still happy with the idea/ yarn/ design itself. But you have another idea you want move on to, or your hands need a break from the current yarn weight and needle size, or ... Any myriad of reasons really. And that item that you were so excited to get started becomes a chore to get through, a seemingly never ending abyss of a project...
In case you haven't guessed, I'm currently stuck in the slog phase of a design. I started knitting the sample in August, and it's roughly 2/3 finished. And it feels like it will never be over and done with. I've tried giving myself a strict deadline for it to no avail. I've started bribing myself with other projects: "Knit 2 rounds on Neverending, and you can have x amount of time with Fun-thing-designed-by-not-You".
I have other designs I'm resisting casting on even though the patterns are fairly much written because I want to get this one done and into tech-editing before I go on to something else. Even knowing I have fun things coming up once this one is out of the way isn't spurring me on to finish it. It's very frustrating. While I still really like it, I'm starting to loathe it at the same time.
Do you ever find yourself in like and loathe of the same project at the same time? How do you get yourself through that stage? 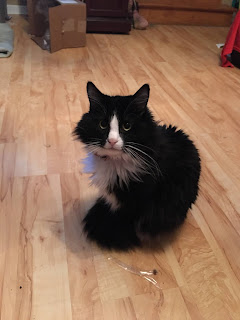 The little floof is doing excellent, I'm happy to report. He's got a few dissolving stitches that should be gone by the 30th (when his next/final? checkup is). He's running, cuddling, rolling around like normal. If it weren't for his shaved backend and tail, you'd never know he had anything wrong!
Funny aside: He was so happy when The Cone came off and he could wash everywhere that he started showing me his butt when he'd get on the bed at night. Jakey is a really furry little guy so the sight of his shaved back end and part of his tail looks very strange next to the rest of him, and prompted Auntie (Bad Auntie!) to start calling him "Captain Velvet Butt" whenever he'd do it. The fur is definitely growing back in but it's still such a contrast to the rest of him. Poor guy goes through everything and then gets an ignominious nickname on top of it all! In true Jakey fashion, he just purrs happily because he loves the attention.
Our fundraising efforts have stalled a bit, (check out my 25% off pattern sale on the Patterns tab at the top of the blog!) so Jakey's Mom (Krista) started a 50/50 to raise the last bit needed. There are 120 squares total going for $10 Canadian each; that'll be $600 to the winner. You can paypal her at PayPal.Me/KristaDani85 adding "50/50 for Jakey" in the comments section.
That's all today!
Yours in Neverending sample knitting, and Jakey snuggles,
Síle
at 5:33 PM No comments:

What to Do During the Green Out 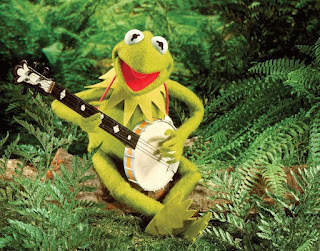 If you've been anywhere near #KnittingTwitter or Instagram, you're probably aware of the green out. The grand logout from Ravelry that was originally March 31st to April 3rd, and is now going until April 6th, to silently(?) protest the continued dismissal of the accessibility issues with NuRav and show solidarity with those who've been hurt, and then gaslit, berated, etc. I logged out late on the 30th for probably the only time ever since acquiring my first smart phone.

Sadly, a lot of people were caught unawares on the 31st when Classic Rav was no-more around 9am Central time. The assumption had been that Classic Rav would go away after the 31st not on it. I sincerely hope no one was severely hurt by that completely petty move.

I'm making do with the screenshots I took of my last few (I think there were 6 or 7) projects from 2010, and getting those put up on my project notebook blog. I've even started a couple projects lately so now I have an "in progress" tag for those.

I'm actually having fun going through my old projects and photos, and I look forward to going into Ravelry, for the brief amounts of time I can tolerate it, to retrieve more of them. I wish I'd thought of this idea to make a blog notebook sooner, but hindsight is truly 20/20 sometimes.

What are you doing during the green out? Are you finishing WIPs? Casting on new projects from patterns you've had in your library for awhile? Humming along with Kermit? Keeping on as you have been?

Brief update on Jakey: In case you're wondering about him, my furball nephew is doing really well. Well, other than his latest stunt of trying to get in my bedroom window while still wearing The Cone. Um, yeah, furry nephew landing on me while I was asleep at 7am on a Sunday morning was not how I thought I'd be waking up today. As you can see though, he's none the worse for wear: 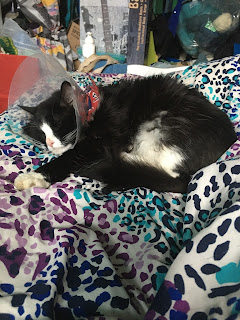 Silly boy. He'll be very glad to be rid of The Cone later this week.
A reminder: all of my patterns remain on sale for 25% off with the coupon code Jakey to help Jakey's Mom with his vet bill. You can shop directly from the pattern tab above.
Yours in yarn and sleepy furry nephew purrs,
Síle