Down Yet Another Rabbithole

I've been slightly laid up again this last bit; pain spikes and some lightheadedness, just enough to keep me fairly much in one spot. So I decided to check out the videos referenced in some of the patterns I acquired during FOYAL 2020 (prizes from the games for the most part) on Saturday since I wasn't doing much.
That passed the day and evening right well! Because of course after watching the pertinent videos I had to check out the other videos of the same designer, which led me to actually watching the videos I'd subscribed to from other designers, and... There went Saturday!
Two of the designers I was watching also mentioned their Patreons. Patreon, if you're not familiar with it, is a site where you can pledge a certain amount each month to a creative person to allow them to more freely work as a creative and still have a steady income stream instead of only eating when they've made a decent sale. Knitty magazine has a Patreon to keep the magazine's patterns available for free while still paying the designers (and staff!!) for their work. I know of a few authors, designers, and musicians who use the set up and it's something I've thought of doing off and on. I just don't know what exclusive content I could offer; my social media is already full of behind the scenes Jakey and Silver pics ;)
Speaking of, they've quite liked having Auntie in a less mobile state lately: 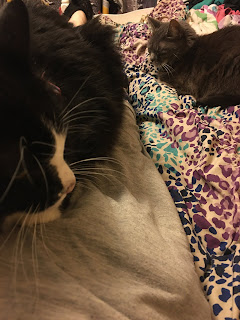 A new work week begins today, so I should bid adieu to the rabbithole(s) and get on with some work!
Yours in yarn and car fur,
Síle

What do you think? I'd love to hear from you!